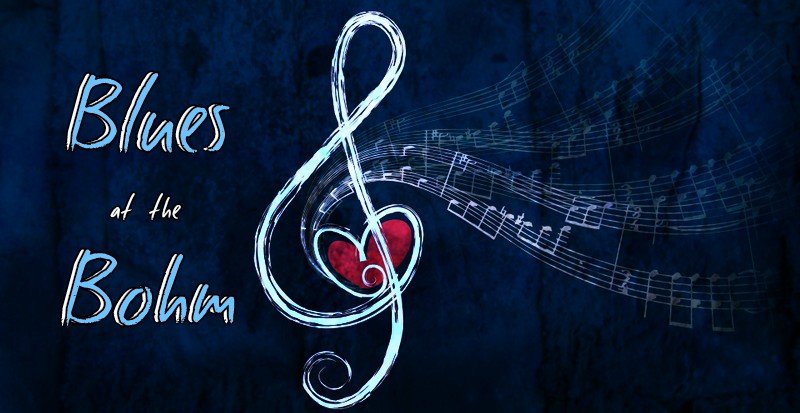 *some shows may vary in ticket price

Help support live music performance and education by becoming a Blues At The Bohm Sponsor! Download our Sponsor Form 2018-19 BATB SUPPORT REPLY Doc or contact Nancy at director@bohmtheatre.org.  It is a GREAT advertising value for your business.

With a special thanks to Randy Vallance Photography

Holy cow! This is just amazing.

Twenty college students are on the stage of the beautifully restored Bohm Theater in Albion, built in 1929. Behind them is a huge brick wall. A movie screen usually covers it, but this show is live. While the rest of the theater is polished and glittering, the wall is gritty and gnarly.

It is just like the music these kids are playing-polished, glittering, gritty and gnarly.
I love the music of my parents’ generation, the old time jazz, blues, Dixieland and big-band swing music, and that is exactly what I am hearing. The place has a good crowd for this monthly event, called Blues at the Bohm and all are clapping, cheering, tapping toes and swaying along. I am smiling ear to ear.

After the first set, the college jazz band hustles off the stage and the pros come forward to jam in smaller groups. A handful of the college kids returns to back them up.

It is a fascinating format-there are great musicians taking the stage to play and sing their music, often with less experienced musicians trying to learn from them. Music that was created in the 1800’s by African-American musicians in the south and refined and advanced ever since is now heard on stage in Albion, Michigan, where gray-haired wizards are shouting, nodding, smiling and swinging their instruments in the strange language only known by fellow musicians, instructing the newcomers in their craft.

A tall man playing bass guitar turns his back to the audience to face the young drummer and correct the patter of the sticks on the drumheads, the cymbals, the rims-for a song he’s never heard before. The guy at the microphone is singing the blues while he plays a strong riff on his guitar, and nods at a trumpet player to take a solo—in a song he’s never heard before.

My dad was a jazz musician-he sat or stood at his piano a dozen times a day throughout his life to crank out a few chords or several songs, often singing all the verses. I grew up with that old music, and enjoyed countless hours listening and watching the little combos dad would play with-a few horns, a drummer, the piano, a singer, a banjo-whatever. I was fascinated by the combination of skill and the mysterious communication that flowed through the group.

Watching it now on a bigger stage with such a wide range of skills, and the teaching and coaching going on between the experienced and less experienced is an outright joy. One college kid gets the nod to take a solo with her horn. Her eyes widen in fear. She has no written music before her– and has never heard the song before. A gray haired harmonica player pushes her forward, whispers a couple of tips and tells her she can do it-and, she does it, improvising with the best of them. When the solo ends, the lead  guitarist applauds her effort, clearly impressed.

After the concert, I speak with my friend Cliff, a chemistry professor at Albion College who is part of the organization for Blues at the Bohm. He is himself a musician. As he announced each changeup on the stage during the evening, he kept saying how excited he was, at one point saying, “If my head explodes, someone else is going to have to finish for me.”

“This is the best kept secret in southern Michigan!” he says now. We are standing in front of that gritty, gnarly brick wall at the back of the stage. The loud echoes of the gritty, gnarly, polished and glittering music are still sounding in my ears as young and old musicians pack up their gear, exchange names, bump fists and high-fives.

If you like great blues jazz, let me tell you the best kept secret in southern Michigan.

Blues at the Bohm. Google it. Check it out.

Thanks to all of our Blues Partners ~